The Difference Between Being Frugal And Cheap 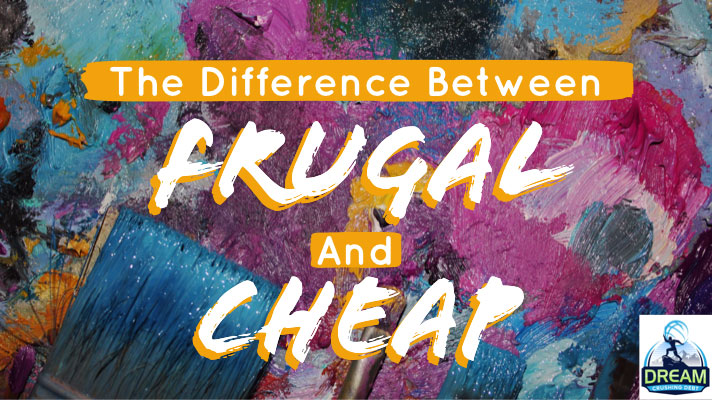 There really is difference between a cheap and frugal person, although there is some (actually, there is a lot) of confusion on being able to identify which camp you or someone you know falls into. When someone calls me “cheap,” I get defensive because at the root of it, they don’t understand how I spend money and where I put value in what I spend money on. Just because I have different values and priorities than you, doesn’t make me a cheapskate. In fact, I view myself as more frugal than anything else.

If you good this very topic, you’re going to find several blog posts out there trying to detail and compare the contrast between cheapskates and frugality. There’s no scientific way of breaking it down or a test you can take or a DNA tube you can spit in that helps determine where in the spectrum you are. It comes down to a perception of social etiquette within your culture and when you’ve violated the rules of engagement.

There is a TV show called “Extreme Cheapskates” that I’ve only seen a single episode of. In this episode there was a gentleman who was so cheap that he would buy two-ply toilet paper… separate the two layers… and roll it back up into two separate rolls of toilet paper. Later in the episode, it was his wedding anniversary and his wife begged him… BEGGED HIM… to not embarrass her by taking food from other people at the restaurant. He couldn’t resist. He approached people who had appeared to have stopped eating and asked if he could have what was left on their plate. If they left before he could ask, he would quickly rush over to the table scrape off the unwanted food onto his own plate. This is being cheap!

My jaw dropped watching this episode. I couldn’t believe there were people out there like that.

The one commonality between these two characteristics is that they both like to save money. How they go about it and who they affect in the process is where you’ll find major differences.

What is a frugal person?

The best definition I have seen on this is: A frugal person is someone who lives simply and economically.

A frugal person in my mind is someone who’s interested in saving money, but not afraid to spend it either. For example, you’ve been saving for a new car in anticipation of replacing an old one you own. When the time comes, you know that whatever you buy next you will have for 15 years or more until it’s wheels fall off. So, you research and do your homework and you end up spending your money on a brand new car. Because you want something new and you want it to last for at least the next decade or more.

A frugal person often consideres the long term consequences and ultimate value of where their money is going to get the most out of it.

What does cheap mean?

A cheapskate is simply someone who doesn’t like to spend money. And they’ll go to great lengths to save money wherever possible, regardless of who it might affect.

A cheap person is constantly looking at the bottom line and going for the lowest possible price. Even if that means they’ll spend more later to replace cheap products they bought.

In the example of buying a new car, a cheap person can save the same amount of money with the intent of spending it on a new car. However, when the time comes to buy this new car, they instead start shopping for used cars that are much older and have a lot more miles on them. They find a good deal on this used car not much newer than their current one buying all the snake oil they could. Not too far down the road – the transmission goes out, tires need replacing and the ignition struggling. The cheap person will nickel and dime a repair man to fix his issues and insist on driving the troubled car because well… he spent good money on it.

Are you frugal? Or are you cheap? Do you consciously spend your money? Or do you wield an iron fist? Let me know in the comments below.